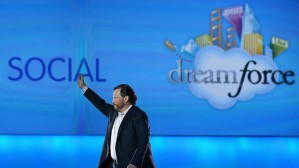 Dreamforce, like Salesforce.com’s ambitions, just keeps getting bigger. This year’s event in San Francisco claimed 90,000 registered attendees and 250 media, analysts and bloggers. The pageantry surrounding the event—from MC Hammer to the Red Hot Chili Peppers, and from Tony Robbins to Colin Powell—is also on the rise, seemingly in direct proportion to Salesforce’s enterprise ambitions.

Anyway, with so much erupting from Mt. Salesforce, I need to write a two-part blog post. This first post covers the Salesforce.com’s vision and announcements, and my perspective on them. The second post, which will be up in a few days, will cover how Salesforce’s ever-expanding ambitions translate and apply to small and medium businesses (SMBs).

CEO Marc Benioff’s keynote featured the success stories from marquee customers, including Activision, Burberry, Coca Cola, Commonwealth Bank, GE, Virgin Atlantic and Rossignol. Through these customer vignettes, announcements, demos and, interestingly, IBM’s 2012 CMO Study, Salesforce made its case for enterprises to buy into its version of the social enterprise.

While Salesforce isn’t the first vendor to come up with any of the ideas put forward, Benioff and team continue to aggressively extend the Salesforce footprint along cloud, social, and platform themes, and its push beyond CRM into other functional areas. A drink from the fire hose includes a slew of new directions and offerings. A few are available now, but most are slated for general availability later in 2012 or in 2013. They include:

As important, in just a few years, Salesforce AppExchange has grown to become a mature ecosystem for developers. Over 350 partners attended Dreamforce 2012, and Force.com development partners such as FinancialForce and BMC Remedyforce are enjoying a great growth ramp on Salesforce’s coattails.

In the analyst Q&A, Benioff explained that Salesforce is that it is trying hard to move from geek speak to talk and walk like the new breed of IT customer, the CMO. In both the keynote and the Q&A, he reiterated that IT spending will increasingly shift from IT to CMOs. He also underscored that Facebook has become the most popular app on the planet because it is so intuitive, and his belief that all business apps will eventually need a Facebook-like activity stream because that is the interface users know and will demand.

Really, what could play better into Salesforce’s hands as it tries to expand its enterprise footprint against stalwart ERP vendors? Larger enterprises have pretty much taken care of business in the back office. And smaller companies top priorities most often center on revenue growth and customer acquisition. With a CMO-centric view of the world, Benioff & co. can position Salesforce as chief mentor and leader in the next wave of IT innovation—in the front office, collaboration and user interface arenas. For example, I think that Benioff is spot on with his statement that all business apps will need a Facebook-style feed interface to take the friction out of using them and facilitate user adoption. Meanwhile, compelling customer success stories and strong partner growth underscore that Salesforce is ready to take its game to the next level.

Unlike some of its competitors, Salesforce also has social in its DNA from the top down, which should prove to be an enormous advantage. However, rivals are not going to yield turf easily. In fact, it’s ironic that, in addition to helping to fuel Benioff’s agenda with its CMO research, IBM already walking much of the Salesforce talk.  IBM coined the “social business” term before Benioff coined “social enterprise,” and many of the solutions that are in the works at Salesforce bear a close resemblance to IBM solutions such as IBM Connections, Smarter Commerce and SmartCloud—all of which are available now. Meanwhile, many of Salesforce’s newly announced offerings won’t be ready for several months or more–and are somewhat lightweight compared to comparable offerings from the competition.

But sometimes, lightweight is better. Some apps are so clogged with feature bloat that they actually hinder getting work done instead of enabling it. And, I’ve said many times, Benioff is a marketing genius. He has an uncanny knack for winning by articulating a new value proposition better than anyone else in the industry. While he may need to play catch up in terms of getting his solutions to market, it’s likely that his messages will be the first to come through loud and clear in many corporate boardrooms.

Google Panics Over ChatGPT [The AI Wars Have Begun] youtu.be/Nh5i5obZ8OY via @YouTube

Easing the transition to mid-market software accountingtoday.com/news/easi… < Thanks, @TedNeedleman for this helpful article, and for sharing my thoughts and so many great ideas from others in it!