Over one-third of U.S. workers are now part of the gig economy, up from 17% in the 1989 survey. Whether you call them freelancers, contractors or contingent workers, gig workers are expected to grow as a percentage of the workforce: Intuit predicts the percentage of self-employed workers to rise to 43 % by 2020 (Figure 1).

What is the gig economy?

Gig workers don’t have traditionally-defined, salaried relationships with employers, or benefits such as medical insurance or a 401(k), but they do have more flexibility and autonomy. The category includes self-employed as well as temp workers, contractors, on-call workers and part-time employees, spanning industries from construction to pet care, and from professional services, such as web design and programming, to Uber and Lyft drivers.

The gig economy started to take off in the 2008 great recession, when layoffs hit hard and hiring ground to halt. Workers needed income, and many turned to contingent work to make ends meet. Many businesses brought on contract workers rather than staff employees to keep overhead down and gain flexibility to scale the workforce up or down. At the same time, new marketplaces for freelancers, such as Elance (now UpWork), Freelancer, Guru and others started providing matchmaking services to bring employers and freelancers together.

Since then, the economy overall has rebounded but the gig economy continues to grow.

The Gig Economy and SMBs

The gig economy is certainly an important factor for SMBs. First, of course, “non-employer” businesses of one are gig workers, but also small businesses. According to the U.S. Census Bureau, more than 22 million U.S. businesses has a single owner, but no paid employees.

In addition, SMBs rely on external workers/freelancers to perform a wide range of business functions (Figure 2).

SMBs are most likely to rely solely on gig workers to get the job done in accounting/financials, workforce management/payroll and marketing. SMBs are also most likely to use a combination of salaried employees and gig workers for these areas, along with business intelligence/analytics.

Overall, SMB plans to hire more workers in the next 12 months are strong (Figure 3), with larger SMBs more bullish on hiring than smaller ones. As shown, while plans to hire salaried employees are strongest, SMBs also expect to hire more contractors and freelancers, with   marketing, business intelligence, accounting/financials and customer service cited as the top areas.

In addition to dealing with different regulatory and compliance requirements, SMBs that hire gig workers often have to juggle workers who are frequently off-site, schedule their own hours and may have multiple priorities and little experience with their company’s mission.

As discussed in SMB Group’s 2017 Top 10 SMB Technology Trends, this trend, as well as the rise of remote working (telecommuting and traveling workers) and the influx of millennials into the workforce, highlight the changing face of the workforce and workplace. 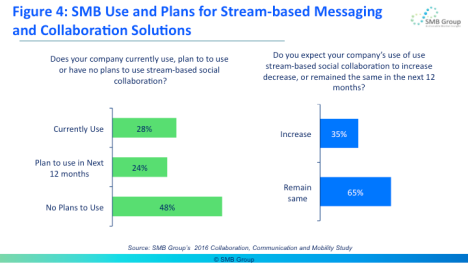 For instance, stream-based messaging and collaboration solutions provide a unified view and access to information across servers, clouds, apps, devices and locations. Examples include Slack, Salesforce Chatter and Quip, Microsoft Teams, Cisco Spark and RingCentral Glip. These solutions not only help facilitate collaboration between employees and contractors across physical locations, but also across digital ecosystems.

Since SMB reliance on gig workers is likely to continue to grow, now is the time for SMBs to refresh workplace culture, strategy and solutions to attract, engage and retain employees and contractors. SMBs that use figure out how to and streamline collaboration will reap productivity gains today, and the flexibility necessary to scale the workforce–whether salaried employees or contractors–up or down in the future.

SMB Technology Directions For A Changing World--see the results of our latest survey study! smb-gr.com/reports/smb-te…

Do not every buy appliance extended protection from @Lowes. They do not honor it at all

IMPACT OF COVID-19 ON SMBS: NAVIGATING A PATH FORWARD How SMBs expect the impact of COVID-19 to evolve in the next 6 months, plus tips to navigate: bit.ly/35hVt36 #SMB #smallbiz #covid-19 #movingforward @Acumatica @SageIntacct @Workday @smbgroup pic.twitter.com/KaJb2KXzPt

We are facing one of the biggest personal and business challenges of our lifetimes. SMB Group is fielding a survey to better understand the impact of Covid-19 on SMBs. Please take our survey: bit.ly/2xiMMZn. We will share survey findings when completed. pic.twitter.com/1RCHBzT2ZP

We are facing one of the biggest personal and business challenges of our lifetimes. #SMBGroup is fielding a survey to better understand the impact of Covid-19 on SMBs. Please take our survey: bit.ly/2J5BP06 . We will share survey findings when completed. pic.twitter.com/PioOGVV5oo