While Dell Technologies’ metamorphosis was evident in many of the new solutions it announced, it was also on full display in the “Engines of Human Progress; Transforming Lives with Technology” exhibit in the Village at the Solutions Expo. Engines of Human Progress demonstrated Dell’s vision and commitment to putting technology to work to help solve some of society’s most pressing challenges.

Considering the scope of environmental concerns facing our planet, I was particularly interested in the initiatives that Dell showcased in this area—and one more for good measure.

India is home to 14 of the 20 most polluted cities in the world, and battles on many fronts to fight air pollution. Dell Technologies’ newest packaging effort is to partner with Indian startup Chakr Innovation to create ink made from smog, and use it in Dell packaging.

Chakr’s technology, Chakr Shield, is a retrofit emission control device for diesel generators, which are responsible for much of India’s pollution problem. The device can capture around 90% of particulate matter emissions from the exhaust of the generators. In addition to preventing emissions from going into the air, the devices capture the soot to create carbon black used to make ink. 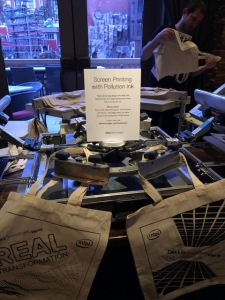 pollution ink in December 2017 to offset-print on shipping cases, and has found the ink works as well as regular ink, giving it the potential to work not only in packaging, but for any type of printing. At the show, Dell used the pollution ink to print swag bags for attendees.

Dell has long been a pioneer in scouting and partnering with small companies like this to develop sustainable packaging technologies. With its deep supply chain expertise, Dell can help these young companies scale and gain the efficiencies necessary to supply large companies.

The amount of gold and other precious metals in any individual electronic device is small, but it adds up quickly:  According to a recent report by EPA, one million cell phones contain about 20,000 pounds of copper, 20 pounds of palladium, 550 pounds of silver, and 50 pounds of gold. And a ton of used motherboards has up to 800 times more gold than a ton of gold ore.

But recycling rates for e-waste are still low—around 15% globally. 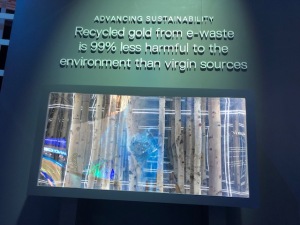 Dell, which uses about 7,000 pounds of gold in its products every year, is working to capture and reuse gold and other precious metals to help reduce the social and environment impacts of mining. Dell mines its own recycling stream for these metals through its Dell Reconnect partnership with Goodwill in the U.S. It refurbishes and resells computers that work, and disassembles those that don’t.

Dell works with partner, Wistron GreenTech, on gold reclamation, which has a 99% lower environmental impact than traditionally mined gold.

In 2018, Dell became the first PC manufacturer to use recycled gold in new products, starting with the motherboards its Latitude 5285 2-in-1. Dell also unveiled a partnership with Niki Reed to create jewelry made from gold recovered from computer motherboards, The Circular Collection by Bayou with Love. The collection includes 14- and 18-carat gold rings, earrings and cuff links.

Keeping Ocean-Bound Plastics Out of the Ocean

Plastic is everywhere, including an estimated 86 million metric tons in our oceans. Studies reveal that around 12.7 million tons of plastic waste are washed into oceans every year. This plastic is killing fish and wildlife, destroying coral reefs and threatening entire marine ecosystems. By 2050, scientists estimate there could be more plastic than fish in the sea. Dell highlighted this problem at the event with a giant sea turtle filled with ocean plastics. 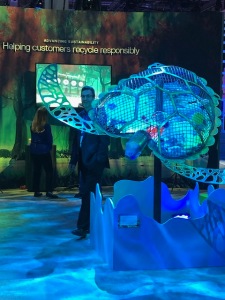 Dell aims to help address this problem by preventing plastics from entering the ocean in the first place. developing the first commercial-scale global ocean plastics supply chain. Dell and Lonely Whale formed a collaborative and open-source initiative called Nextwave, and brought many high-profile customers, including GM, Trek Bicycle, Herman Miller, Hewlett Packard and others on board to ensure the scalability of the project.

In 2017, Dell began using ocean-bound plastics harvested from beaches, waterways and coastal areas in protective trays for its XPS 13 2-in-1 line. The company has also set a goal to source 100% of its product packaging is sourced from sustainable materials by 2020, and pledged to increase its annual use of ocean plastics ten times by 2025.

Dell has partnered with Deloitte and eNABLE to create prosthetic arms for children. The partnership took shape when Dell employee Keith Dyer’s 7 year-old daughter, Phoebe, lost an arm due to a rare congenital limb disorder. The team built a 3D printed prosthetic arm for Phoebe, customized to her needs, and designed with the theme of Elsa from Disney’s Frozen movie. 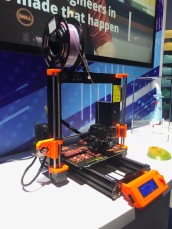 The project grew as another Dell Technologies team member heard the story, and decided to get involved. Dell employee Ronnie Egnatuk realized that the Dell Precision Workstation—which has been used to design special effects for movies such as Spiderman, and dragons for Game of Thrones—could also be used to design prosthetics.

At the show, Dell and eNABLE demonstrated how they build these prosthetic arms using Dell Precision laptops and a 3D printer. It costs roughly $15 worth of materials, and takes about 14 hours to print and 4 hours to assemble each arm.

Today, the team is designing and printing prosthetic arms for children and adults around the world, including for under-served populations, and making the designs available on Dell’s Community Makers Lab in India.

These examples illustrate just a small portion of how Dell is bringing its 2020 Legacy of Good plan, originally penned in 2013, to life to help people and the planet. Closing in on 2020, they highlight the great progress that Dell is making on its goals–and the promise that its plans for 2030 will be even more inspiring.

What We Know: Preparing for the Next Normal
How to Approach Your ERP Selection During the Pandemic
Building Culture and Collaboration for the Next Normal: Join Us on LinkedIn Live
Zoho Bigin: A New Way for Small Businesses to Get Started with CRM
Top 5 End-User Takeaways from Anderson Frank’s Annual NetSuite Salary Survey